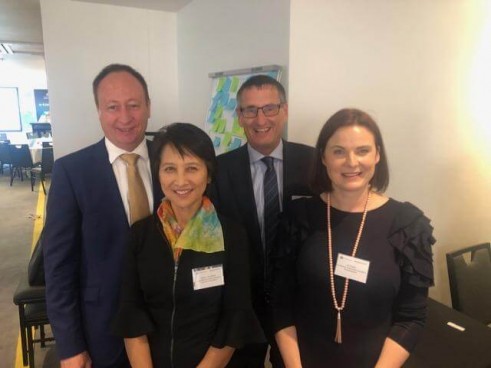 Karen Lay-Brew recently spoke on behalf of ABSIA about what the decision to use the international standard Peppol means for Australian and New Zealand DSPs by drawing from the international experiences of European and other countries who have incentivised their economies to adopt e-invoicing.

The Trans-Tasman team held this as a follow-up preliminary information session after the two countries' Prime Ministers announced they will  be adopting Peppol for the Single Economic Market approach to e-invoicing. The representatives from the Trans-Tasman team shared their learnings from the recent trip to the OpenPEPPOL General Assembly.

The event was very successful with a capacity audience of over 100 attendees with approximately the same number watching the livestream. The livestream will be made available in the near future.

If you missed Karen's presentation, please see the transcript of her speech below. Read more about the A-NZ e-invoicing Forum here.

[Transcript begins]
Good Morning. It’s my privilege to present at this Forum on behalf of ABSIA.  Thank you to the Trans-Tasman e-invoicing team for inviting me to say a few words.

Last month, the decision to adopt Peppol was announced. A year ago, the A&NZ PMs decided that the two countries will do eInvoicing under Trans-Tasman Single Economic Market approach. One of the anticipated benefits is to reduce payment times to the SMEs.

Here are a few points of interest for the DSPs:

Using Open technology creates opportunity for our local technology companies to expand to the rest of the world. At the same time, international companies will want to participate in our eInvoicing markets. We must anticipate, be prepared and start taking action.

E-invoicing in Asia:
Asian countries are our neighbours. At the ASEAN Single Window Trade Symposium in Nov2018, they discussed eSupplyChain and e-invoicing between ASEAN nations. BTW, eInvoicing is not new to most Asian countries, eg Malaysia started using it in early 2015, Mongolia mandated e-invoicing. All Indonesian companies have had to use e-invoicing since 1/7/2016. Singapore’s national eInvoicing went live in January this year with the Government as the first adopter, and their plan is that all businesses will use e-invoicing.

Last year, Singapore Government became the first national authority outside of Europe to join OpenPEPPOL. At the General Assembly 2 weeks ago, NZ and Australia were welcomed into the OpenPEPPOL community. I am hoping that these 3 nations together can inspire and assist other nations in the region to go Peppol.

The Australian Government has a policy to build and support a vibrant technology industry. Over the last few years, quite a number of ABSIA and industry members have invested significantly in state and federal e-invoicing pilots.

A plea to our Government Colleagues: when you move from pilot to implementation, please – give opportunity to the small and medium technology providers and not go just to the usual big vendors.

Governance:
ABSIA fully supports OpenPEPPOL. We also welcome the oversight of ANZEIB.  One request I do have for the Minister: on the governance board, please include industry stakeholders who will be instrumental to help build a robust ecosystem with strong participation by the private sector.

Adoption:
A quick look at what other countries have been doing:

Adoption is consistently the biggest challenge– even with compelling reasons, many factors get in the way of success. Can’t under-estimate adoption effort if we want to achieve anywhere near the estimated economic benefits. I urge the Ministers to VERY strongly encourage all parts of the economy to adopt Trans-Tasman e-invoicing, and allocate sufficient budget to support it.

ABSIA:
Allow me to summarise by telling you a bit about ABSIA.

One final announcement: On 30/4/2019, ABSIA will hold a webinar for Introductory Peppol training,
1) how to install an open access point,
2) a demo of OpenPEPPOL compliance infra, and
3) a rep from a company which provides AP-as-a-service.

If you are not already a member, please join ABSIA.